Over the past years we have been accustomed to hearing about repeated cries of distress coming from inmates in prison cells and their families, as well as solidarity campaigns from public figures or activists, and countless reports and statements from many civil society organizations that attempt to pressure the Egyptian government to stop violations against detainees from across the Egyptian opposition spectrum.

However, the Egyptian government has consistently either ignored or attacked rights reports that highlighted the suffering of detainees; and the Egyptian Foreign Ministry used to heap groundless accusations against human rights organizations that address the reality of the poor conditions of Egyptian prisons.

But amid the outbreak of the coronavirus both in Egypt and worldwide, the Egyptian government must stop such practices and immediately release detainees, especially prisoners of conscience and regime opponents – because the continued incarceration of detainees under these conditions means subjecting them all to a kind of mass execution. In addition, not only prisoners are exposed to coronavirus infection but also their jailers (officers and security agents) and everyone that contacts with them inside prisons and detention centers.

Egyptian prisons are foci of coronavirus

It is no secret that tens of thousands of political detainees and double these numbers of criminals suffer so much inside Egyptian prisons. According to a report of the Egyptian National Council for Human Rights (NCHR) published in 2015, the over-crowdedness rates in Egyptian prisons exceed 160 per cent of their capacity, and more than 300 per cent in police stations. The NCHR mentioned in its annual report on the human rights situation in Egypt (2015/2016), that the reports of the council delegations that visited some prisons unanimously agreed that the services available in these prisons are poor due to their over-crowdedness.

On the other hand, the Human Rights Monitor accused the security services in Egypt of “persistently killing dissidents and prisoners, by detaining them in inhumane conditions, and denying patients the right to medication,” adding that the Egyptian authorities “do not want to take a serious stand on improvement of prison conditions and detention centers despite their over-crowdedness, which allow rapid transmission of infection among inmates”.

Also, there are many detainees that have died in prison due to the deliberate medical negligence from the prison administration that failed to respond to calls for improving prison conditions and provide appropriate medical care to inmates, making prisons a fertile environment for the outbreak of coronavirus and the rapid transmission of infection.

Calls for the conditional release of detainees

Several international human rights organizations in addition to many civil society organizations have called upon governments, including the Egyptian regime, to release prisoners of conscience after the outbreak of coronavirus, given that Egyptian prisons lack the lowest standards of health and hygiene.

UN High Commissioner for Human Rights Michelle Bachelet has called on governments to take urgent action to protect the health and safety of people in detention and other closed facilities, as part of overall efforts to contain the COVID-19 pandemic. “Governments are facing huge demands on resources in this crisis and are having to take difficult decisions. But I urge them not to forget those behind bars, or those confined in places such as closed mental health facilities, nursing homes  and orphanages, because the consequences of neglecting them are potentially catastrophic,” the High Commissioner said.

In a Human Rights Watch op-ed on 16 March, Amr Magdi, a HRW researcher on Middle East and North Africa, said “In a country like Egypt where basic rights are severely stifled, there are many rights-related ramifications during a public health crisis. One of the most urgent is the impact on vulnerable groups, such as those in closed, densely crowded prisons.” Amid the outbreak of coronavirus pandemic, the Human Rights Watch called upon Abdel Fattah Al-Sisi to “immediately order the release of the thousands of people detained for peacefully exercising their rights”.

On 20 March, Amnesty International announced that “Amid rising fears over the spread of coronavirus (COVID-19) in Egypt’s overcrowded prisons, the Egyptian authorities must immediately and unconditionally release all activists and human rights defenders detained solely for peacefully expressing their views.”

In addition, an urgent distress message was leaked by some inmates in Tora Prison, titled “Save us before it is too late”, in which detainees called on international human rights and medical organizations, as well as “every free man who believes in our right to life” to save their souls as “Sisi regime kills us via spread of COVID-19”. The detainees said many of them started showing COVID-19 symptoms, including cough, high temperature, cold, and pneumonia, adding that they live in a state of fear and terror, and each one of them started writing his will. On the other hand, jailers completely ignore their cries, as they are afraid of even entering prison wards or talking to inmates.

Iran, the United States, Turkey, and Syria have taken steps to allow a conditional release of prisoners, particularly political prisoners, as part of measures to counter the spread of the coronavirus pandemic.

– In light of the threat posed by the likely outbreak of coronavirus inside Egyptian prisons, the security authorities should immediately release detainees, especially the elderly and ill inmates, no matter they are criminals or political prisoners; as this is the most appropriate strategy in addressing epidemics and limit their spread – especially that Egyptian prisons are unprepared to face the spread of coronavirus pandemic.

– The Egyptian government should disclose the real numbers of prisoners and capacity of prisons, as well as the numbers of deaths in prisons and their causes.

– The Egyptian authorities should stop the continued renewal of pretrial detention, and to release those that have been in custody without trial for months and even years.

– The Egyptian government must stop ignoring human rights calls and international appeals for the conditional release of detainees and prisoners of conscience, as the situation is highly vulnerable to an epidemic explosion inside Egyptian prisons, which will not differentiate between prisoners, jailers, defendants, lawyers, prosecutors or judges – or their families – as everyone is exposed to COVID-19 infection. 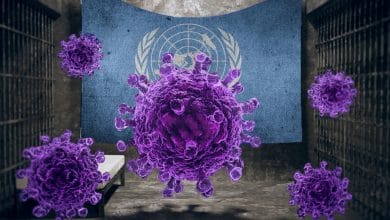