In the wake of the agreement signed between Turkey and Libya last November on demarcation of the maritime borders between the two countries, several questions were raised about maritime border demarcation in the Eastern Mediterranean and Egypt’s relation to this matter, especially in light of Egypt’s official rejection of the Turkish-Libyan agreement.

This paper attempts to provide a brief review of the concept of demarcating maritime borders, and then address the dimensions and consequences of the Turkish-Libyan demarcation agreement on Egypt’s political and economic interests.

Coastal States can exercise sovereignty over their territorial sea up to a limit not to exceed 12 nautical miles. The territorial waters are considered within state borders, allowing these states to respond to any penetration or violation.

With discoveries of oil and gas in deep waters, beyond territorial waters, as well as the huge fish wealth there, amid absence of laws to control exploitation of these riches and demonstrate countries’ ownership over them, the United Nations in December 1982 drafted the UN Convention on the Law of the Sea (UNCLS).

The UNCLS set regulations for dividing sea and ocean waters beyond territorial waters of coastal states, as Exclusive Economic Zones (EEZ), defined by 200 nautical miles from coasts of countries, with respect to natural resources and certain economic activities. Therefore, coastal states have the right to exploit the wealth and the right to explore for oil and gas in these exclusive economic zones, but it has no right to control maritime navigation there (i.e. not treated as territorial waters) as other States have freedom of navigation and overflight in the EEZ, as well as freedom to lay submarine cables and pipelines.

This shows the size of complications related to the process of delineating the maritime borders in the Eastern Mediterranean region, especially as the region is witnessing historical conflicts between Turkey, Greece and Cyprus, in addition to the Arab-Israeli conflict. It is enough here to point out that most of the Eastern Mediterranean states have not yet delineated their maritime borders.

The problem of maritime borders between Turkey and Greece:

To understand the roots of the problem between Turkey and Greece, it is necessary to review the historical background of the problem. After the defeat of the Ottoman Empire in World War I, some of its lands and islands were distributed to some European countries, including the island of Kastellorizo, which came under the Greek sovereignty even though it is approximately one mile from the Turkish coasts (Fig. 1). 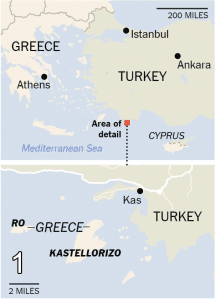 The island (Kastellorizo) returned to the scene again after the emergence of the Eastern Mediterranean region as a promising region with respect to discoveries of natural gas reserves, where each country is seeking to establish its right through delineation of its maritime borders, to start works of exploration and drilling. The problem here is that according to the 1982 UNCLS, the Kastellorizo island that is located directly in front of the Turkish coasts falls within the exclusive economic zones of Greece, completely ignoring the Turkish rights despite the country’s long coasts along the Mediterranean (Figure No. 2). However, Turkey is among a few countries that have not signed the United Nations Convention on the Law of the Sea (The United States is also among the countries that has not signed the UNCLS). Turkey considers it illogical to deny Turkey’s rights in these areas, giving these exclusive economic zones, including the island of Kastelorizo, to Greece (Figure 3). 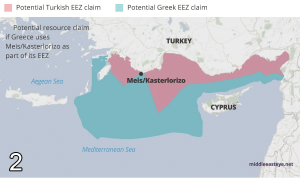 During Mubarak’s reign, Greece sought to demarcate its maritime borders with Egypt according to the Greek vision, but Egypt gave no response; and the matter remained pending due to Egypt’s awareness that the way to demarcate maritime borders with Greece according to the Greek vision would result in Egypt’s loss of a large area of ​​its exclusive economic zones; and would at the same time strain relations with Turkey.

There is a serious intention by Israel, Cyprus and Greece , with support from the European Union, for establishment of an East Med gas pipeline to transport gas from Israel and Cyprus via a pipeline that runs in the Mediterranean deep waters extending  up to Greece and then to Europe, as a substitute for the Russian gas that dominates the European market (Figure 4). In short, if this pipeline turns into a fait accompli, it will destroy Egypt’s future role as a regional hub for exporting natural gas in the Eastern Mediterranean area. Therefore, it is not in Egypt’s interest to ever establish or accomplish this pipeline. If construction of the pipeline is an unavoidable reality, Egypt should at least be keen that part of the pipeline should pass within its maritime borders to achieve economic gains through obtaining passage fees.

To understand the relation between the pipeline with the demarcation of the maritime borders, as the East Med pipeline starts from Israel through Cyprus up to Greece, we have to focus on the part of the pipeline that will link Cyprus to Greece passing via Mediterranean waters:

– According to the Greek vision of its maritime borders and the island of Kastelorizo, as we have explained, the pipeline is supposed to pass through a joint maritime bar between Cyprus and Greece.

– According to the Turkish vision of its maritime borders and the island of Kastelorizo, as we have explained, the maritime bar linking Turkey to Libya (after the recent demarcation agreement signed by Turkey and Libya) will cut off that maritime bar linking Cyprus to Greece, which means that the East Med pipeline will have to pass through either Turkish EEZ or Egyptian EEZ, to reach Greece; and because of the Turkish-Greek historical differences, it is most likely that the pipeline will pass through Egyptian waters up to Greek waters, which clearly shows that the Egyptian interest is completely compatible with the Turkish vision, regardless of the political dispute between the two countries.

As explained above, the Egyptian interest is compatible with the Turkish vision of delineation of the maritime borders with Greece; but in light of the tense relations between Egypt and Turkey and at the same time the alliances between Egypt, Israel, Cyprus and Greece, it seems that Egypt will tend to demarcate its maritime borders with Greece according to the Greek vision, as there is a desire on both sides to accelerate determination of their exclusive economic zones after the Turkish-Libyan agreement, which results in Egypt’s loss of strategic and economic gains only for alignment with the Greek position against the Turkish decision. It is noteworthy that the same policy was adopted by the Egyptian regime when it signed a multi-billion dollar deal to import gas from Israel, ignoring the threats the deal causes to Egyptian national security by mainly relying on Israel for importing a great deal of Egypt’s energy needs, as well as suspicions about the deal’s economic viability.

In fact, the Egyptian regime’s policy in management of the East Mediterranean file does not rely on a vision for achievement of national security or economic interests as much as it depends on provision of consensuses for appeasement of its international and regional allies and supporters in order to ensure its survival and continuity in power, which results in dependency and ultimately leads to making decisions far from Egypt’s interests in various situations.

In short, the Egyptian strategy for managing the Eastern Mediterranean file must focus primarily on achievement of the Egyptian interest and preserving the Egyptian national security in the first place before even seeking economic gains.