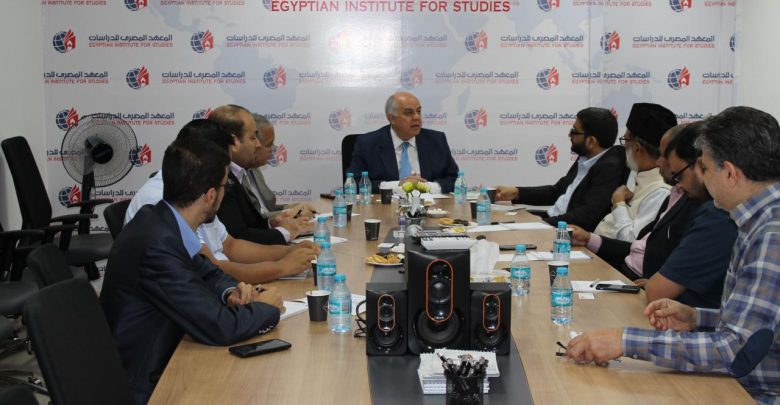 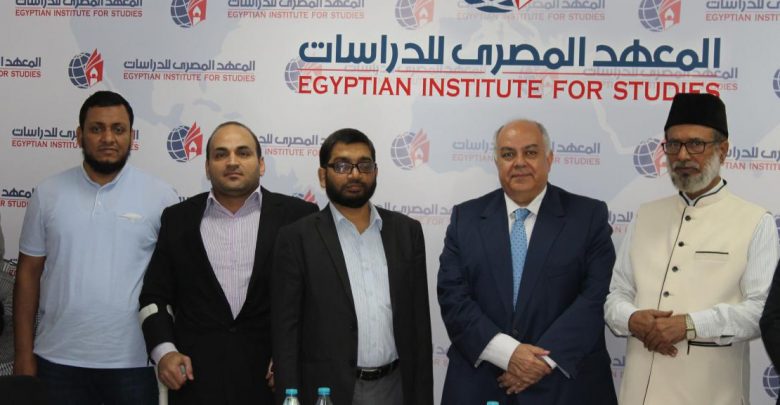 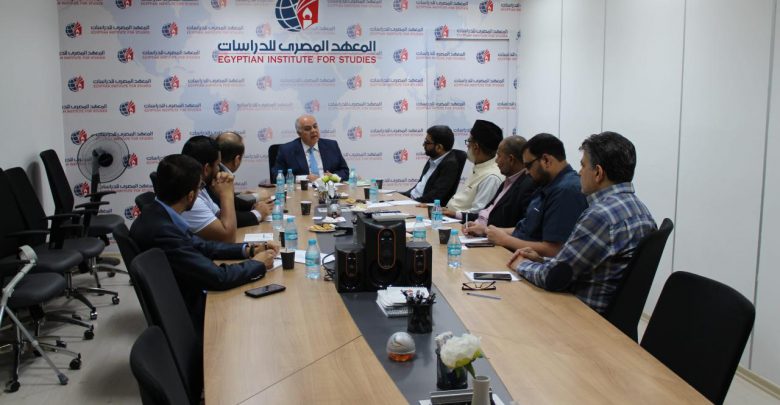 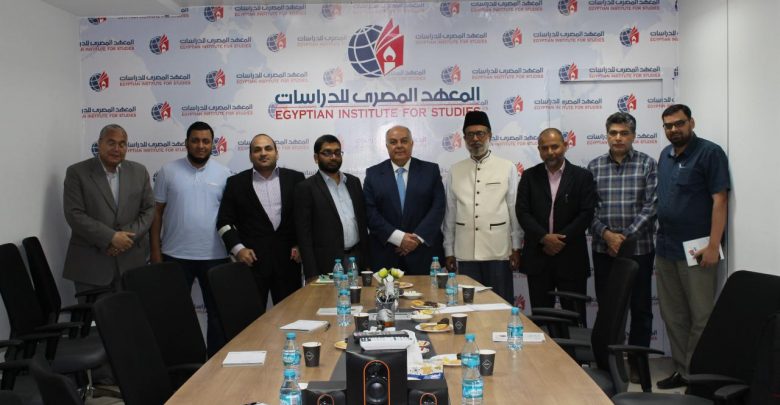 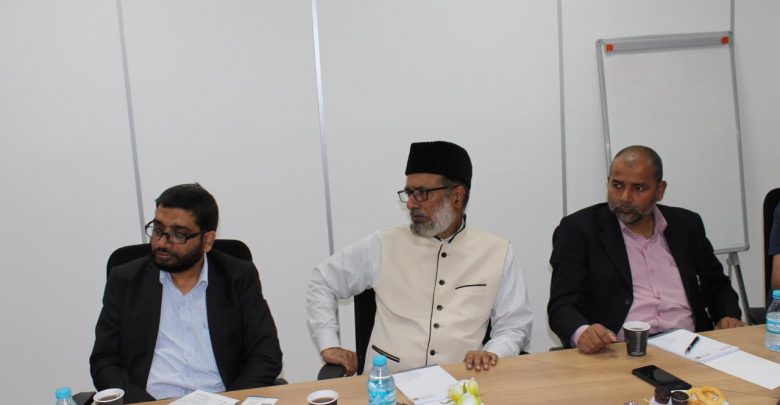 The visit comes within the framework of activation of cooperation between EIS and research centers as well as non-governmental organizations. The delegation was received and welcomed by Dr. Amr Darrag, the EIS President and Dr. Essam Abdel-Shafy, the EIS Chairman, as well as a number of EIS researchers.  In the beginning, Dr. Darrag gave a brief presentation on the mission and duties of the EIS and introduced Dr. Essam and the attending researchers to the delegation. Then, the delegation members started to introduce themselves and speak about the democratic situation in India as well as the role and activity of non-governmental organizations in the Indian community, as follows:

Dr. Hasan Raza talked about the democratic challenges faced by Indian people in general and Indian Muslims in particular. He also shed light on the consequences of India’s division into two countries on Indian Muslims (after India’s independence in 1947, giving birth to Pakistan, a new Muslim majority country). The situation of Indian Muslims worsened after India’s division as most of the Muslim elite and middle class shifted to Pakistan, leaving only poor Muslims suffering.

The “Islami Academy Trust”, of which Dr. Raza is Chairman, is a society aimed at developing educational training and research programs for general Da’wah (Islamic call and preaching) for the benefit of Muslim communities within  and outsides India, and committed to the realization of Islamic message thorough its programs.

The aims and objectives of “Islami Academy Trust” include:

1- To undertake academic research in the various disciplines and fields of learning specially comparative religion with particular reference   to those religions that originated in the Indian sub-continent .

2- To prepare and develop literature in accordance with and on the line of results of the research achieved as per the objective mentioned above.

3- To establish a central library to help and aid the above objects as well to meet the needs of other works of research in various  fields of learning. The library shall contain books on all subject specially in the fields of History ,sociology ,economics, political science, languages as well encyclopedias on various subject. The library shall also make available periodicals, professional magazines and journals on various subjects to the scholar with the facilities of computer printing internet connections, and photocopy.

4- To arrange for training programs and to prepare a team of social workers and organizers who shall work for the propagation of moral and ethical values in the society .

6- To hold workshop, seminars and symposia in order to disseminate moral and ethical values.

8- To work on the improvement of syllabus prescribed in the school and colleges and universities as well as other seats of higher learning.

9- To undertake a program for development of a model syllabus for schools and colleges and also a model guideline for the work of research.

10- To undertake such programs, scheme  ,projects  and activities and to set up such institutions that may promote the aims and objective of the trust.

11- To undertake the advancement and propagation of general education and learning and for that purpose to establish maintain and support schools, colleges and other general, technical, and professional educational institutions, research institutes etc.

3- Syed Sadatullah Husaini, Director of “Centre for Study and Research” in Hyderabad, and Vice President of Jamaat-e-Islami Hind (JIH):

Jamaat-e-Islami Hind (JIH), an Islamic organisation in India, is part of the Pan-Islamic movement and draws its inspiration from the Muslim Brotherhood of Egypt. The JIH practices Da’wah (Islamic call and preaching) and engages in socio-economic activities in India. JIH focuses on the establishment and realisation of religion and it committed itself to following peaceful-methods, avoiding all activities which might lead to communal disharmony.

Mr. Husaini also stressed that Indian Muslims suffered after India’s division, which gave birth to Pakistan, as most of the higher class shifted to the new Muslim-majority country.  Anyway, in the post independent democratic India, with minimum support, the Indian Muslims shaped their fortune and started slowly contributing in the national development.

However, the deep-rooted social discrimination based on religion and ethnicity severely crippled their ability to influence and contribute in public spheres. Recognizing the enormity of the problem of growing Muslim marginalization and deprivation; in the year 2005, the Government of India commissioned Sacchar Commission under a High Court Judge with the mandate to ascertain the level of Muslim deprivation in the country. The report highlighted damming facts about Muslim condition in the country and urged the government to take series of affirmative actions to address the issue. The Sacchar Committee highlighted that Muslims in India stand at par with some of the country’s most underprivileged groups, and pointed at acute social exclusion that translates in geographic isolation (ghettos) and obstacles in accessing employment and welfare schemes.

About preparations for the 2019 elections in India, Indian Muslims are cooperating with other Indians on defending issues like human rights, social justice, and community peace against the existing policy of hatred – through the Welfare Party of India, an Indian political party which was founded on 18 April 2011, and strives for what it deems “value-based politics” in India.

WHEN THE DICTATOR RULES, THE NILE DRIES UP