After the death of Dr. Essam El-Erian, a prominent Muslim Brotherhood leader, in Egypt’s notorious high-security Aqrab (Scorpion) Prison on 13 August 2020, social networking sites flared up with posts of mourning and praying for the deceased, disseminated by activists and politicians from various orientations.

Although the pro-regime media outlets announced that El-Erian had died of a “heart attack”, many opposition leaders, political party figures, and human rights defenders accused the Egyptian authorities of “intentionally killing” him, at least through medical negligence.

El-Erian’s death also coincided with the seventh anniversary of the Rabaa al-Adawiya massacre, the worst massacre in Egypt’s modern history, as if the Egyptian regime – after seven years of the massacre – was sending a message to the people of Rabaa and all opponents that it would eliminate them all.

A rights organization, the Community for Justice, on December 10, 2019, documented the death of 958 detainees, including 9 children, in Egyptian detention centers during the period between 30 June 2013 and 1 December 2019. With the deaths that have occurred this year, the total number of deaths among detainees reached 1013, including 17 deaths due to COVID-19 infection, in 12 detention facilities, in 5 different governorates.

Let us shed some light on Scorpion Prison or the “Egypt Guantanamo” prison, as some prefer to call it. The prison’s official name is “Tora-992 High Security Prison”, where the idea to build it arose after a group of Egyptian security officers returned from a training course in the United States at the end of the eighties of last century.

The Scorpion Prison is located in the Tora Prisons Complex, located in Tora, southwest of Helwan, south of Cairo, which is the most recent prison established within the Tora Prison Complex, where the construction of the first prison started in 1928 during the royal period, when the Wafd Party’s Interior Minister Mostafa El-Nahhas.

After that, other prisons were established to become a complex for several prisons, the last of which has been the Scorpion Prison, whose construction started in 1991 during the reign of Hosni Mubarak, when Hassan El-Alfy was Interior Minister, and was completed on 30 May 1993 and officially inaugurated on 26 June 1993 in the presence of then Assistant Interior Minister Habib Al-Adly.

The walls surrounding the Scorpion Prison are seven meters high, with armored gates both from inside and outside, while all the offices of the prison officers are located behind barriers and iron bars.

The Scorpion Prison contains 320 cells divided into four horizontal wards that take the shape of the letter “H”, where each ward is completely separated from the rest of the prison once its armored gate is closed. In the Scorpion Prison, inmates cannot communicate through cells, as prisoners usually do in other regular prisons, due to the huge quantities of reinforced concrete that blocks sound.

In each cell, there is a 100-watt electric lamp that is controlled, with respect to switching it on and off, by the fluctuations of the penal policy of the prison administration, where the administration can turn off the lights, and even water, and close the existing tiny windows as it deems appropriate – with 20 cells are also used for discipline, as solitary confinement, especially for political detainees.

Since the July 2013 coup d’état, dozens of political prisoners have lost their lives as a result of the prison administration’s obstinacy in providing necessary medical treatment to political detainees, most prominently the former General Guide of the Muslim Brotherhood, Mohamed Mahdi Akef, where the National Security officers had refused to allow his transfer to a private hospital for treatment before his health later deteriorated. Also, Nabil El-Maghrabi, one of the founders of the Egyptian Jihad Movement, and the oldest political prisoner of the modern era, died in prison due to medical negligence.

Also, the Scorpion Prison administration, specifically officer Ahmed Ezzat, refused to allow any doctor to examine Dr. Farid Ismail, former parliamentarian and member of the Executive Office of the Freedom and Justice Party (FJP), or send him to the prison’s hospital after he had suffered a severe hepatic coma. Instead of being treated, he was prevented from leaving his cell and stripped of all necessary stuff such as soap, spoon and a prayer rug. Furthermore, he was forced to eat the prison food that is unfit for human use, which led to his premature death after he fell into a coma for two days, without any response from the prison administration.

Also, the death of late President Mohamed Morsi – who died during his trial – was the result of medical negligence and denial of health care, which exposed the current regime’s tendency to avenge its political opponents in prisons, with torture, neglect, and solitary confinement, amounting to deliberate killing.

The Egyptian Ministry of Interior adopts the strategy of medical negligence to get rid of the regime’s opponents, against the law governing the current prison conditions in Egypt, which stipulates that curative service and health care are an inherent right of every prisoner, which the Prisons Authority must provide through its affiliated institutions, or through private hospitals at the expense of the prisoner after taking “necessary approvals”.

Dr. Essam El-Erian himself complained, in previous court sessions, of being prevented from receiving medical treatment inside prison, being ill-treated and held in solitary confinement, and deliberately deprived of adequate food and personal hygiene stuff.

At one of his court sessions, El-Erian said, “We are exposed to pre-meditated killing in prisons; they are taking revenge on us.”

In addition, the term “necessary approvals”, required for treatment in private hospitals at the expense of the prisoner is a vicious circle within which a political detainee spins if he falls ill in prison, whereby the detainee moves between the prison administration, the Prisons Authority’s medical department, the medical clinic inside the prison, and the Authority’s consultant doctors, where all these quarters are subject to the Interior Ministry’s National Security Sector that holds the key to access to health care.

The demise of Dr. Essam El-Erian in prison after years of medical negligence, has aroused concerns among detainees’ families, both at home and abroad, for fear that their loved ones detained in Sisi’s prisons would suffer the same fate.

In fact, the Egyptian prisons have turned into execution slots for killing detainees through depriving them of the right to necessary medical care, and also by providing a fertile environment for the spread of diseases and epidemics in detention centers, due to lack of hygiene, pollution, over-crowdedness, and failure to isolate COVID-19 infected detainees from the rest of detainees, after the outbreak of the coronavirus among inmates.

The conditions inside Egyptian prisons add to the imprisonment penalty other grave violations, most seriously medical negligence and denial of the right to proper health care, which would increase the number of deaths of detainees in various prison facilities.

In frequent cases, victims complained to the court of exposure to medical negligence along many other violations, before their death; But the Egyptian judiciary is also implicated in those deliberate crimes committed by the regime, where the result is a toll of hundreds of victims.

The continued detention of elderly people in Egyptian prisons indicates the government’s deliberate killing of them inside their cells, most recently in this regard has been the arrest of Dr. Mahmoud Ezzat (76), the acting General Guide of the Muslim Brotherhood.

The regime must be pressured to deal seriously with the cases that are presented to the Prosecutor General against these abuses, and avoid closing them, which further encourages officers for more killing under the auspices of the law. Unfortunately, many families do not believe that the legal path can be of any use to them; and therefore their main hope is to receive the bodies of their loved ones, to avoid exposure to harassment and abuse from the Ministry of Interior.

Accordingly, activists and opponents should intensify pressure on the international community, hold it responsible for the continued increase in deaths among political detainees in Egypt.

They should intensify international rights activity to allow the release of vulnerable political detainees that are expected to face the same fate of El-Erian, especially in light of the regime’s intention to target opposition figures and leaders inside prisons, especially leaders of the Muslim Brotherhood, by denying them medicine and necessary health care. 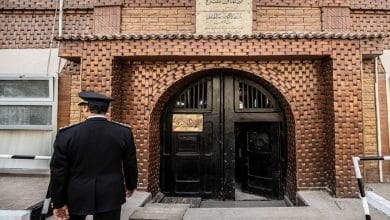