Stability of exchange rate in Egypt

The average dollar exchange rate fell in July 2017 against the Egyptian pound to 17.8 pounds, and continued to decline in September and October of the same year in a row to reach 17.5 pounds and 17.6 pounds, according to Egyptian Finance Ministry data. This gave an impression of an unprecedented state of exchange rate stability in Egypt since the Central Bank of Egypt (CBE) devalued the country’s local currency in November 2016. (The dollar exchange rate had jumped to over 18 pounds a few days after the CBE decision.) This positive impression was due to CBE statements that the foreign exchange reserve exceeded $ 36 billion.

However, Standard & Poor’s Global Ratings (S&P) gave different indicators. The S&P report on the Egyptian economy in November 2017 expected that the dollar exchange rate will reach 19.5 pounds at the end of the current fiscal year (end of June 2018), and that the Egyptian pound will continue to decline in the fiscal year 2019/2020 to reach 21.5 pounds against the dollar.

According to exchange rates, investors make their decisions, foreign investors choose their proper investment environment, and importers make their own business decisions. However, any increase in the dollar price usually adds new burdens to ordinary citizens amid rising inflation rates. Therefore, all economic activity actors watch what will happen to the exchange rate in Egypt in the coming period.

What is the truth about the stability of exchange rate in Egypt in light of the conflicting expectations and the real money exchange rates? Is this stability true according to supply and demand on the dollar in Egypt? What is the price that Egypt pays to reach the current exchange rate?

In the following lines, we’ll try to answer these questions and provide an outlook for the dollar exchange rate in Egypt:

The following table shows Egypt’s main foreign exchange resources and liabilities, according to data of the balance of payments for the fiscal year 2016/2017: 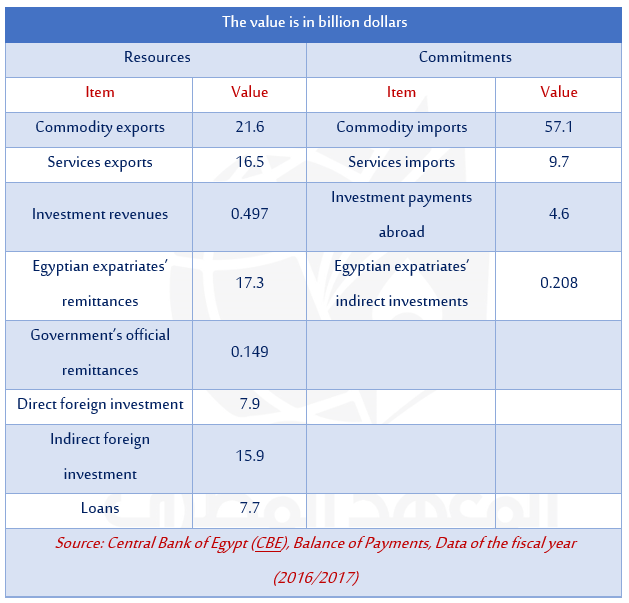 The above data indicate a set of conclusions that illustrate the fact that there is a deficit in Egypt’s foreign currency revenues and payments, where revenues at the end of 2016/2017 only include $ 7.7 billion as loans, and $ 15.9 billion as foreign direct investment. A large portion of this money is classified as hot money that has come for investment in the government’s domestic public debt via the T-bill mechanism, especially after the devaluation of the Egyptian pound by more than 100%, and a 20% interest rate on these bills. It is worth mentioning that one of the Finance Ministry officials said that foreign investments in treasury bills amounted to 19 billion dollars. Also, other Finance Ministry officials had announced that these investments are expected to reach 20 billion dollars by the end of 2017.

One of the worst negative effects of the government’s decision to allow foreign investments in internal debts is that the proceeds of these debts are used to bridge the budget deficit, not directed to investment. Also, management of these proceeds is not transparent in terms of: how to deal with them, who is committed to repay, and when will they be repaid?

After four and a half years, foreign investors (in Egypt’s internal debt) completely recover their capital as well as the net profit that they annually receive – which they transfer abroad at the expense of Egypt’s low income of foreign exchange. This means that the exchange rate of the Egyptian pound will further decline during the coming period.

In the past few months, the Central Bank of Egypt has ordered Egyptian banks to raise the level of required reserves held at the CBE to 14% instead of 10%. The CBE decision was aimed at restricting liquidity rates to reduce the inflation rate. Though this decision was positive, but it forcibly prevented Egyptian banks from investment in the country’s domestic debt in favor of foreign investors. This will be an additional burden for the demand on dollar in the coming period and will accordingly contribute to the devaluation of the Egyptian pound against the dollar.

With respect to payments, it was also noticed that the value of commodity imports remained a difficult figure in the equation of Egyptian balance of payments, a pressure card on the monetary policy maker, and one of the weaknesses of devaluating the Egyptian pound. Although the government has taken many measures to rationalize imports, including denial of many import orders submitted by suppliers; however the commodity imports reached $ 57.1 billion. (The rate was only $ 60 billion before the measures).

The existence of this imbalance in the structure of commodity exports and imports shows that the stability of the exchange rate in Egypt over the past three months is not real. However, there are other factors behind this artificial stability of exchange rates, most notably direct and indirect foreign loans (Indirect loans means foreign investment in domestic debts).

The CBE economic bulletin data show that the debt of Monetary Authorities – the Central Bank of Egypt – increased to US$ 30.3 million at the end of June 2017, compared to US$ 9 billion in June, 2013. The high rate of indebtedness of the CBE is clearly due to the fact that it used these debts in the composition of the foreign exchange reserve, estimated at about $ 36 billion. The CBE data also shows that gold represented $ 2.6 billion of reserves in June 2017. This means that the majority of the declared reserves are, in fact, debts that do not represent real components that could enable decision makers of activating the open door policy and allowing the CBE to intervene for achieving a balanced exchange rate (through sale and purchase). It is assumed that the reserve is the government’s way out of its crises, including management of its basic import needs, but in fact, it has become a burden on the Egyptian economy.

Third: the price of fake stability

We pointed above to the financial cost born by the Egyptian budget and the balance of payments due to the foreign investment in the domestic debt. The same can be said regarding the external debt burden which was estimated at $ 7.1 billion in June 2017 against $ 3 billion in 2013. In light of the expansionary policy pursued by the government, these burdens are expected to increase. Accordingly, there would be negative consequences that restrict employment of the state’s public revenues and affect public services, including education, and health; basic facilities including drinking water and safe sanitary drainage, as well as roads, communications and public transport.

In the absence of a program to deal seriously with the debt crisis in Egypt, both domestically and externally, the current economic policy will maintain what is known as the mechanism of replacing old debts with new debts. Thus, the debt crisis will continue and the situation is expected to further deteriorate if the government does not stop the debt drain, particularly with respect to external liabilities, which represent a burden on the balance of payments.

An example for the absence of a policy or a program for the repayment of Egypt’s public debts and getting rid of their negative burdens was a recent statement by Egyptian Minister of Finance Amr Al-Garhi who said that he has approved all the procedures for Egypt’s issuance of dollar bonds in the international market in amounts ranging between 4-6 billion dollars during January 2018, that will be followed by the issuance of other bonds at about 1.5 billion euros. Also, he announced a few days ago that the Egyptian government signed a $ 1.1 billion loan with the World Bank and a $ 500 million loan with the African Bank. The government’s pursuit for concluding loan agreements was for repayment of scheduled debts. The government also announced that it would repay the African Bank loan by $ 2.3 billion in December 2017. In addition, there are other liabilities scheduled in 2018.

Among the negative consequences of the foreign investment in domestic debt is the government’s inability to lower the interest rate – fearing that these investments will go to other markets – or to raise the value of the Egyptian pound against the dollar as it would be in the interest of investors if they wanted to exit the market.

Fourth: Future of the exchange rate

In the short or medium term, there will be no increase or surge in Egypt’s foreign exchange revenues. Short-term expectations show a decline in some traditional foreign exchange resources such as the Suez Canal, which declined in June 2017 to $ 4.9 billion compared to $ 5.1 billion in June 2016. The increase in some of the balance of payments items during the first quarter of 2017/2018 (in tourism by about $ 600 million) are insufficient and do not contribute to stabilizing the dollar exchange rate. Remittances of Egyptian expatriates may be reduced during the coming period because of the Gulf countries’ recent policy of firing foreign workers or delaying their salaries. Although oil exports increased by about 900 million dollars in June, Egypt’s oil balance still suffers from a deficit of about 4.5 billion dollars annually.

Standard & Poor’s estimates about the devaluation of the Egyptian pound against the dollar in 2018 to 2020 did not come from a vacuum, as the demand on the dollar will increase to meet the government’s liabilities and cover the domestic market needs of dollars for imports. At the same time, the supply of dollar through self-generated revenues is shrinking amid fluctuation of revenues in general because of external factors, both at global and regional levels.

The central bank’s recent decision to lift restrictions on the withdrawal and deposit of foreign exchange, this does not mean that there is a positive return on exchange rate policies. In order to measure the negative or positive effects on the exchange rate resulting from the CBE decision, the government should lift restrictions on imports, so that the mechanism of supply and demand could function properly. There is a real shortage of some goods in markets, attributed by some to the restrictions placed by the Central Bank of Egypt on the import of some goods, leading to the state of recession in some sectors of the Egyptian market.

It is known that politics greatly affect the economic situation in any society. Therefore, the political and security factors, including the upcoming presidential election, and acts of violence such as what has recently taken place in Sinai’s Al Arish airport (of targeting the ministers of defence and Interior) – evoke fears among tourists and investors, and may lead to a further decline in the value of the Egyptian pound against the dollar.

Intersection of Egyptian-French positions in the Libyan issue