The famous Greek historian Herodotus summarized the importance of the Nile River to the Egyptians by saying “Egypt is the gift of the Nile”.  It owed its survival to the annual flooding of the Nile. Famine and death occur when the flood is delayed and the Nile dries up. About 110 million Egyptians eat, drink and live on the Nile waters, the only life artery.

Ethiopia announced in April 2011 that it intends to build four large dams on the Blue Nile, which is the source of 85% of the river’s waters, including one of the largest in the world, the Grand Ethiopian Renaissance Dam (formerly known as Project X or the Grand Millennium Dam).

This huge dam will flood 1,680 square kilometers of forest in northwest Ethiopia, near the Sudan border, and create a reservoir that is nearly twice as large as Lake Tana, Ethiopia’s largest natural lake.

The US$5 billion scheme is out of scale for such a poor country; the current cost estimate equals the country’s entire annual budget. The project’s size and electricity capacity of 6,000MW have been exaggerated as filling such a huge reservoir (it will retain 74 billion cubic meters of water, which is exactly the same as the total shares of Egypt and Sudan) will certainly impact Egypt, which relies almost totally on the Nile for its water supply.

The potential for conflict is probably the main reason international funders have shown no interest in supporting the project. The dam was scheduled to be commissioned in 2017, but it was delayed due to corruption in the implementation, as Prime Minister, Abi Ahmed said, his government assigned the dam to people who had not seen a dam in their lives from engineering company of the Ethiopian army.

Although it is Africa’s biggest dam project and will have lasting impacts on its longest river, the GERD has been developed under a veil of secrecy. The dam will impact Ethiopians and downstream neighbors, yet its planning process has been top-down and unilateral. The public and dam-affected people have not been given a meaningful opportunity to critique the project or process. The Ethiopian government has stated it will not make changes to the project.

Even donor governments were taken by surprise when the project was suddenly begun. Norway, which had been designing two Nile dams for the Ethiopian government, was blindsided by the GERD project, which nullifies the work already done on the other two dam projects.

Damming a shared river in a secretive and unilateral fashion goes against best practices for managing shared rivers. International rivers are governed by laws Convention on the Law of the Non navigational Uses of International Watercourses 1997, in accordance with which any action that affects water quotas requires advanced notice and guarantees against possible harm.”

After construction began, Ethiopia agreed to the formation of an international Panel of Experts, with members from Egypt and Sudan, to review the GERD’s social and environmental impacts on downstream nations.

The 10-member panel submitted its report to the governments in June 2013. The panel found numerous important gaps in the project documentation, and noted:

The present design criteria are “quite general, and do not include project- and site-specific conditions … The most essential geotechnical, seismological, hydro-geological, hydrological, hydraulic and structural design data should be compiled into a consolidated report and not scattered in numerous design reports.” The project’s main design report is outdated and does not reflect numerous and significant design changes to the project.

The stability of the main dam and other main structures should be verified under consideration of additional geological and geotechnical findings.” The panel believes more analysis may be necessary, but without having access to all information on this aspect of the project, cannot be sure. Nonetheless, they do question some assumptions on the project’s “shear strength” and raise concerns about sliding, seepage and other safety issues. The panel also suggests design modifications for the saddle dam and further studies on the spillway dimensions. The panel recommends that the discharge of the “Probable Maximum Flood” used in the dam design be increased.

First and foremost, “The (hydrological study) is very basic, and not yet at a level of detail, sophistication and reliability that would befit a development of this magnitude, importance and with such regional impact as GERD.”

Very little information on how the dam will be operated was given. The report requests verification of the 6,000MW installed capacity. It is not clear whether the present design considers (capacity, functionality) the minimum mean flows of the dry months release to the downstream countries, Sudan and Egypt”.

The report strongly recommends additional studies of the GERD “in the context of the Eastern Nile System” in order to “quantify the downstream impacts in detail with confidence.”

A number of experts believe the dam is not going to produce as much power as is claimed, and that the dam should be smaller in size for efficiency and cost.

Asfaw Beyene, an Ethiopian Professor of Mechanical Engineering at San Diego State University (California) says the dam is 300% over-sized. “GERD’s available power output, based on the average of river flow throughout the year and the dam height, is about 2,000 megawatts, not 6,000. Beyene notes that the Dam is so highly politicized that “it seems to suppress legitimate engineering debates and environmental discussions.”

Mehari Beyene, another Ethiopian expert who worked in the energy sector in Europe, analyzed the project’s efficiency, and raises questions about whether this project is an appropriate investment for an economically struggling country like Ethiopia.

The total investment for the current project could be reduced by at least 40-45% by building a smaller dam with a higher efficiency. Mr. Hailemariam Desalegn, the Ethiopian Prime Minister, disclosed in an interview that the Grand Ethiopian Renaissance Dam is based on a study conducted in 1964 by the US Department of Bureau of Reclamation.

However, that study proposed a much smaller dam with a capacity of 1,400 MW. The project, known as the Border Dam, would have had an 85-meter-high dam, a reservoir just one-fifth the size of the Grand Ethiopian Renaissance Dam, 14 not 74 billion cubic meters and a US$1.5 billion price tag.

In conclusion, a much lower height and lower capacity dam would be more efficient, more cost-effective, and would come with fewer social and environmental impacts.

Surprisingly little information is included on impacts on local people, ecosystems, fisheries or biodiversity. Downstream environmental impacts in Sudan and Egypt were not considered as being significant, and therefore several related socio-economic impacts are not addressed. Dam height was chosen without consideration of downstream environmental and socio-economic impacts. The panel recommends a full transboundary impact assessment be done.

The panel notes that the project did not assess the project’s sensitivity to climate change. A project of this scale and with such heavy reliance on rainfall patterns requires a better understanding of future hydrologic conditions to ensure the highest degree of flexibility and resiliency in its design and operation. The panel recommends a study that looks at the potential influence of climate change on the flow regime at GERD and further downstream.

Egypt called for a new “neutral” panel to adjudicate differences over the project’s downstream impacts. But after the July 3, 2013 coup led by General Abdel Fattah El-Sisi, Egypt retracted its demands and General El-Sisi signed with the President of Sudan and the Prime Minister of Ethiopia the Agreement of Principles on March 23, 2015, and abandoned the recommendations of the International Committee of Experts in order for Egypt to return to its seat in the African Union who froze because of the coup and construction continues at an accelerated rate.

The international Rivers Organization commented on the agreement saying: The secretive nature of such diplomatic endeavors makes it difficult – and perhaps unwise – to speculate on what concessions were made, on what and by whom, inducing Egypt – the once-fierce critic of the GERD – to suddenly assent to the project. Be that as it may, we hope that mounting public pressure and criticism, particularly in Egypt, will encourage the region’s governments to reconsider the negative impacts of the project on downstream countries, and assist the Nile basin countries to better manage the river for the benefit of all its peoples.

German Institute for International and Security Affairs experts said that: The conflict between Egypt and Ethiopia over the distribution and use of the Nile water has entered a new phase. Negotiations on the filling of the reservoir are at an impasse – but with clear advantages for Ethiopia. In the event of new delays, the government in Addis Ababa could initiate a rapid filling, which could cause a dramatic water shortage in Egypt. Renaissance dam would threat stability in Europe’s conflict-ridden neighboring region, and increase migration pressure.

The Nile flow into Egypt could be cut by 50% of the river’s flood to 31billion cubic meters, without committing to the share in the prolonged severe drought period. Which extends to seven years in a cycle that is repeated, also every seven years. Many fear the Dam could push for a water war in the region as the population, the need for food and other needs grow in Sudan and Egypt; and tensions along the Blue Nile will increase.

Egypt’s letter to the Security Council on May 1, 2020, stated that the effects of the water shortage in Egypt resulting from the Renaissance Dam that Ethiopia is implementing will be catastrophic. Millions of Egyptians will lose their jobs, thousands of hectares of arable land will disappear, cultivated land will experience increased salinization, the cost of food imports will increase dramatically, migration to urban cities will increase and the rural population will decrease, which will lead to an increase in unemployment, crime rates and illegal immigration to Europe.

In fact, a decrease of just 1 billion cubic meters of water in the agricultural sector alone would result in 290,000 people losing their income, 130,000 hectares of cultivated land, a $150 million increase in food imports, and a $430 million loss in agricultural production. With the increasing water shortage and its persistence over a long period, the cascading effects on every sector of the Egyptian economy and its social and political stability cannot be estimated. Despite these risks, Sisi agreed to build the Renaissance Dam by signing the March 2015 agreement!

After all, Egypt’s security of supply and Ethiopia’s development are central to the stability of the entire region, home to over 250 million people. A lack of development opportuni­ties and water shortages could have serious consequences for Europe, including increas­ing migration pressure.

The dictator’s army prevented fishermen from fishing in the Ghalioun pond, so they migrated to Libya and then Europe. Stop supporting the dictator so that the climate in Egypt -and accordingly Egyptians- can breathe. 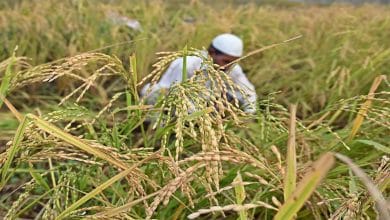